The 17th meetup from eSatya was successfully held on February 5, 2021. The meetup was entitled “Tokenized Economy”. The main objective of the meetup was to discuss the importance, use, and application of the tokens in the economy along with the blockchain system. The speakers for the meetup were Mr. Sushant Chalise and Ms. Rumee Singh. The organizers had a surprise speaker, Mr. Santosh Shrestha.

The first speaker for the session was Mr. Sushant Chalise. He is a CTO and Co-founder of Green Coins and is currently pursuing his Master’s degree in Climate Change and Sustainable Development. Mr. Chalise talked about how we can use tokens as reinforcers that could be used for replacement as the poker chips, cipher, etc. He explained how in the future things will look different with the use of tokens that will reduce the friction in the economy and benefit us with greater liquidity, faster and cheaper transactions while guaranteeing the transparency and accessibility of the economy. He further talked about his venture “Green Coins: For better tomorrow”.

The second speaker for the session was Ms. Rumee Singh, CEO, and Co-founder at Rahat. Ms. Rumee Singh is a humanitarian and digital health expert. Rahat is an aid distribution platform and management system that uses blockchain and ERC 20 and ERC 721 tokens that are both fungible and non-fungible respectively. She shared her idea of the inception of Rahat while she shared about the current problems in the relief distribution such as inefficiency, labor-intensive high transfer, and overhead fees.

The organizers had a surprise speaker for the session who is none other than Mr. Santosh Shrestha. Mr. Shrestha is a blockchain technology expert and developing blockchain baked products. He is CEO at Rumsan Group of Companies. He shared his insights about the power behind crypto tokens and how the tokenized system creates a more secure accounting system. He also intrigued the attendees with his insights about cryptocurrencies, bitcoins and explained the reason behind why there can be not a single more than twenty-one million bitcoins, the price determination, and fluctuation of the value of bitcoins. Mr. Shrestha shared that he strongly believes that blockchain is the future and in about 10 years most organizations will have adapted it and will be using the tokenized economy.

The session was followed by an interesting question and answer session where the participant’s queries were answered by respective speakers. The interesting part of the Q&A session was when one of the participants Mr. Samrat presented an idea that Rahat and Green Coins could collaborate together so that it will be beneficial to all of us.

The meetup was moderated by Ms. Ashmita Manandhar Shrestha, project lead at eSatya. The meetup was supported by the CSIT Association of Nepal, ASCOL IT Club, Digital Notice India. The meetup was hosted in the virtual platform Zoom and was streamed live via eSatya’s Facebook page. 29 attendees attended the meetup in Zoom and 564 people attended the meetup through eSatya’s Facebook page. Towards the end of the session, Ms. Ashmita Manandhar Shrestha shared about the Blockchain Fellowship 2021 program that is soon to be launched by eSatya and encouraged the participants to become a part of it and also shared about Hamro LifeBank, a vein to vein initiative that uses technology at its core to address the current issues with blood shortage and management.

Our video is included here.

On 28th july 2022, Our eSatya team was invited in Presidential Business School to conduct blockchain 101 session

As we know, our world is diving towards AI and Blockchain technology. 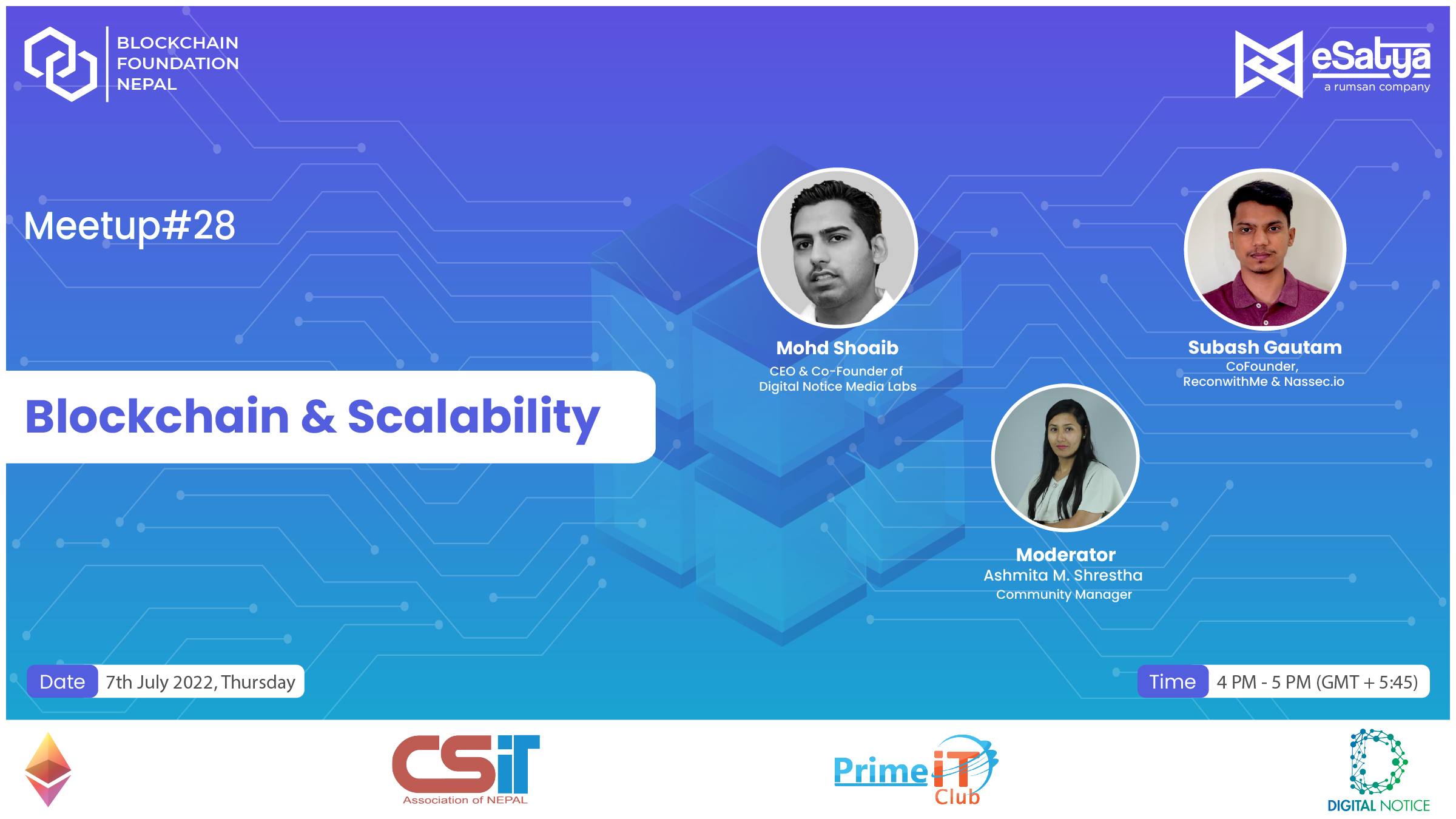