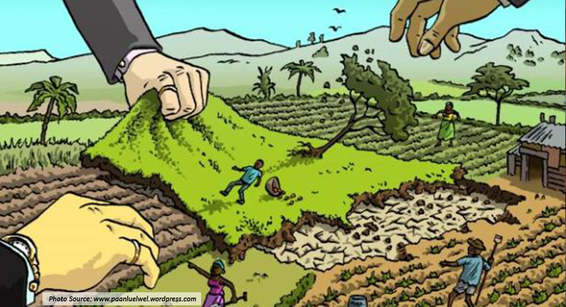 Before getting into Land registry, another use case of the blockchain, let's look at what blockchain is.
The blockchain is a digital ledger, where various information and records can be shared and stored over a network of computers. The information that one can store on the blockchain can be anything such as personal records, sale and purchase of assets, records of ownership, identity and other useful documents of an individual or an organization or even a book. The same information is held across a network of computers – meaning that, it isn't stored in one location. This means that the information is less vulnerable to corruption or to human interference or error. Every computer on the network has to accept every new addition of a new piece of information (or 'block') to the chain.

Now let's explore the potential of blockchain in the field of Land.
A study done by Samriddhi Foundation in 2017 found that there have been approximately 385,978 cases of land disputes in the past 3 years in Nepal. In cases regarding land and properties, it may take several years for the court to resolve one. The backlog of such cases only add up over the years. The digital trust and the Immutability(the ability for a blockchain ledger to remain a permanent, indelible, and unalterable history of transactions) is a definitive feature that will help the court to produce a quick judgment, saving the precious time of the court.

Roughly 15 years ago and prior to that, during the Nepalese civil war, people living in the conflicted areas were forced to flee with nothing but their lives. Those involved in the war also brought down various infrastructures and governmental facilities like VDCs and CDOs along with important documents and records. This brought significant problems in the process of development. Furthermore, this also halted the restoration process because all of the records of ownership of land and properties were on paper.

Similarly, Haiti was struck by a devastating earthquake in 2010 and the situation of Haiti was similar to that of Nepal, though this time, it was because of a natural cause. it has been reported that following the 2010 earthquake in Haiti, recovery efforts face major problems to this day because the ownership of large areas of land cannot be identified. And most of the funds that Haiti received as aid from the various international organization have gone to corruption

Now, what blockchain doesn't ensure is the safety and protection of lives and assets against any kind of natural disaster or war of different types. But it ensures the safety of the records of ownership or whatever that is stored on blockchain against such natural or artificial causes.

In Nepal there is still the practice of traditional paper-based record system, such record system requires a lot of space and is vulnerable to damage and most importantly it can be easily manipulated by the data admin. A blockchain doesn't have one sole owner or admin, the same information is held across a network of computers. That is the specialty of blockchain - it is not a single server. Multiple computers participate in the blockchain network. So even when one computer is down, the other computer performs consensus, mining, and the network is still up and running. This is where distributed ledgers are helpful. There is no single point of failure in the blockchain