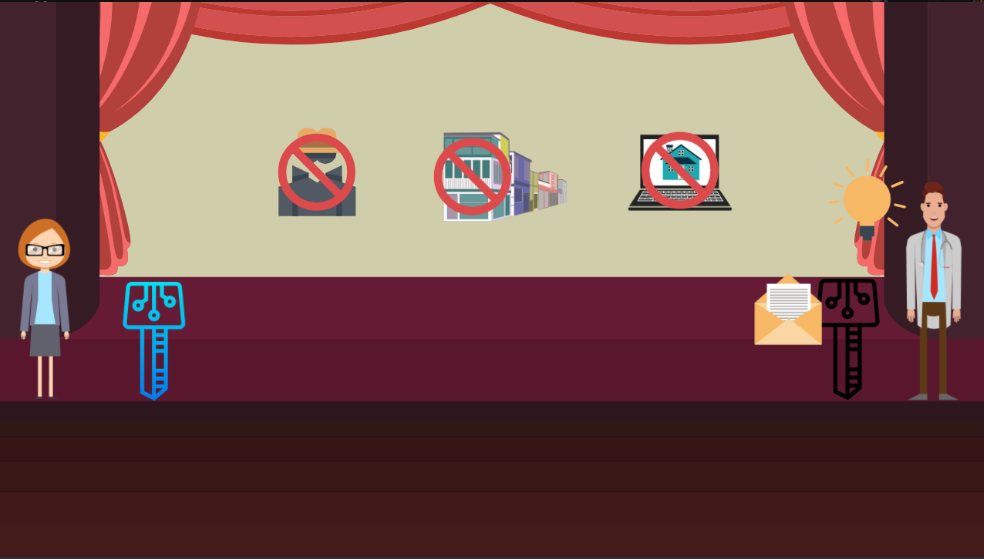 Today, cryptography is essential to pretty much every part of cybersecurity we have. But it's actually been around for a long time. From the Greek cryptography translates to hidden writing. And it's as old as the earliest messages we ever wrote using codes or ciphers,

This was actually used by Julius Caesar to keep military communications private. His cipher involved shifting each letter left by three in the alphabet. The basic idea here is that we use some kind of algorithm to scramble our messages before sending them, so that they just look like gibberish to anyone who might read them. The only ones who can actually read the message are those we share the algorithm with or those who can figure out the algorithm.

Today we send messages digitally through the Internet. Suppose Ila here wants to send a message to Bibek. The problem is we live in a world of unencrypted networks. On the Internet, there's always a third party handling our communications. Communicating over a public unencrypted network means that anyone along the path of the Internet traffic from point A to point B can intercept and read the messages if they want to. It's a lot like sending a message on a postcard in the mail. The mail person can read it if they want to, anyone in the truck can read it, or anyone at the processing facility. But if Ila is sending some confidential information, she doesn't want everyone to be able to read it. So the question becomes, is there a way for Ila to send Bibek a message over the same public unencrypted network but still ensure he's the only one who can read it? There is, it's called public-key cryptography.

And this is how it works. For Bibek to receive encrypted messages, he'll need two related cryptographic keys, a public one he can share with anyone who wants to send him a message, and a private one that he keeps to himself. Let's call them public key and private key, because they're a matching pair, like a lock and key. It is a little confusing calling both keys because the public key is used a bit like a lock.

The public key is called that because it can be shared openly. It can't unlock anything by itself. Public key can encrypt a message but not decrypt a message that it encrypted. That is it can't unlock a message that it locked. So it doesn't matter who else on the network might have it. Private key, on the other hand, must be kept private because it can decrypt, or unlock messages encoded with public key. So that's why Bibek has to keep it private.

Now, Ila takes her message and Bibek's public key and applies an encryption function, so that she'll get a bunch of what's called ciphertext, which looks like gibberish. This ciphertext can be sent publicly on the open network. A third party may be able to see that Ila and Bibek are communicating, but there is no way to tell what they're saying. And since Ila used Bibek's public key to encrypt the message, the only corresponding key that can decrypt it is private key. And since Bibek is the only one in possession of that, Ila can be assured that only he can read the message. Think of it as a mathematical one-way process, where, once a message is encoded with someone's public key, the only way to read it is with that person's private key.

After using public key cryptography, third parties are unable to intercept and read their messages

And it's all but impossible to decrypt or hack the message without it. So one might be wondering what's all this got to do with blockchain? Well, public key cryptography is integral to making blockchain secure. It's the foundation for how digital wallets work, and how tokens are traded, and how identity is verified. We'll learn more about this in upcoming lessons. Public key cryptography is what is used to create verifiable historical records of transactional data. It's the very thing that makes it possible for us to build systems that are run by the global community, systems that can be truly decentralized.

Based on: Blockchain: Foundations and Use Cases by ConsenSys Academy