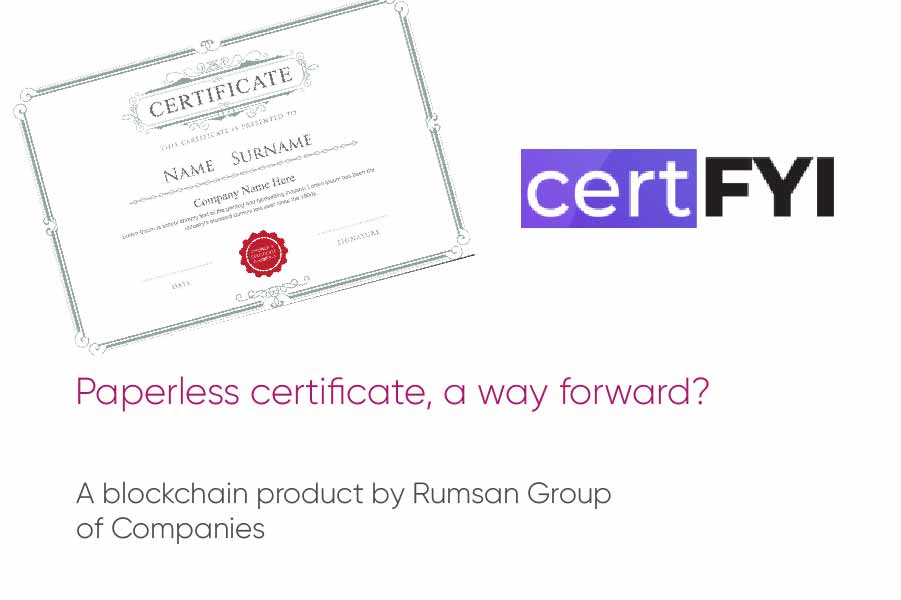 One has to make a contingency plan in doing any certificate related work here in Nepal. Similarly, with the paper-based certificates, there isn’t much option for students to share their certificates when asked to. They can either give them their originals with the constant worry that it might get lost somewhere in the process, or make several xeroxed copies, which again has no way of verifying if that’s actually true to the receiving end. This has been a problem, where as an individual has to face problems like validation, notary and cross-checking. Also the central authority stores and manages the data which has risk of theft and corruption

This issue is common for students as well as college who needs to manage the certificates and maintain its authenticity. Thus, keeping this problem in consideration, eSatya is developing ‘certFYI’ based on blockchain technology.

The success of digital certificate management solely relies on universities keeping tracks of their students and maintaining progress records. This presents significant security risks and overheads. certFYI presents a blockchain based digital management platform for secure and efficient verification of certificates and transcripts without going through the manual cumbersome processes because any entity can check the hash of the certificate to check if one is valid or not. This establishes a mechanism of trust.

In this certification platform once valid digital certificates are issued, recipients can verify them for a lifetime.

Manjik Shrestha, blockchain developer, says ”Imagine a situation in which we apply for a job, then that company has to cross-check our certificates. The company will upload the pdf file of the certificate in CertFYI and then the blockchain network will validate it. The result will be obtained instantly, thus increasing efficiency.”

How does it work?

Issuing a digital certificate is simple with certFYI. Through certFYI platform issuer will create a digital file with basic meta information like recipient's name, date of issue, issuer's name, title of the program, etc. The contents of the certificate is signed using the private key of the issuer. Then, the hash of the document is generated as a tamper proof digital fingerprint and stored in the blockchain network. Our system makes it possible to verify who a certificate was issued to, by whom, time stamp issued date and validate the content of the certificate itself.

They have released the certFYI as a proof of concept. They are also working on internally to release it fully. There is a separate interface for universities as well where they can upload the digital certificate. Whereas for students to receive the certificate, lead developer Raktim Shrestha says that they will soon work on the interface for the students as well.

On August 6, 2021, eSatya provided its Blockchain Fellowship students with digital certificates. These digital certificates can be verified using our verifying platform CertFYI. The digital documents once issued and timestamped cannot be altered or forged.The actual document is not stored in the blockchain, but hash (unique fingerprint) and meta data is published and timestamped by Binance’s blockchain network. This would validate that the exact document was published indeed by the issuer.