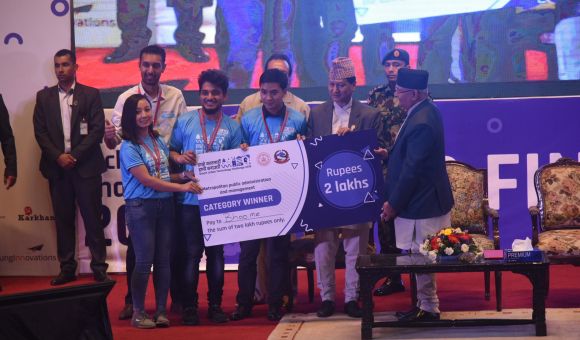 We feel privileged and honored to announce that one of our blockchain based products, Bhoo.me was declared as the category winner in the category “Metropolitan Public Administration and Management” in the Smart Urban Technology Challenge (SUTC) 2018. It is a matter of pride for eSatya team and a huge win for blockchain.Kathmandu Metropolitan City (KMC) announced Smart Urban Technology Challenge 2018  through a press meet on 12th December 2018 at City Hall, Kathmandu with the slogan ‘Hamro Kathmandu Hami Banauchau’.  It was intended as a platform for creative and innovative Nepalese youths to use modern technologies in order to address problems regarding urban management by taking the geography of Kathmandu Metropolitan City (KMC) as their pilot area.

More than 400 ideas were received out of which only 100+ ideas qualified for the next round. Various thematic sessions and training were conducted on the basis of 4 different categories which included Community and Environment, Urban Infrastructure and Municipal Community Services and Metropolitan Public Administration & Management.

On 17th April 2019, after submitting MVP,  top 24 ideas (6 from each category) were qualified to the next round of the challenge. Shortly after that, the demo date was published. The first demo took place at NAST, Satdobato in a closed room. Experts from various fields put forward their remarks and suggestions on how our product could be even better. Keeping their compliments and suggestions in mind, we made some changes in our product. The next  demo session was conducted on 2nd June 2019 at CPC Office Thapathali for a final check on the finale presentation.

Finally, the grand finale of the event took place on 5th June 2019 at  City Hall (Rastriya Sabha Griha). We, along with 23 other finalist teams pitched our ideas and demonstrated our MVP's, in front of the panel of jury members. We were given 5 minutes to present and 5 minutes was allocated for Q&A from the panel of jury. After the presentation and before making a final decision, the jury took a round of the poster demonstration site, where we showcased our MVPs and prototypes.

This was followed by an exhibition where we showcased our MVP's and prototypes to the public who had attended the event. The team members, Aayesha, Ankit, Bibek and Ruchin took turns to explain and demonstrate their ideas to the public which was greatly appreciated. The team was overwhelmed by the support and the feedback received.

Eventually, our ideas were evaluated and we were able to secure the title 'Category Winner' in the category “Metropolitan Public Administration and Management”. It was an honor to have been awarded by the honorary Prime Minister K.P Sharma Oli himself.

On the second part, the category winners, Any Time Toilet,  Bhoo.me, Digital Nepal, TrafficMap were scheduled to present in front of the honorary Prime Minister, industry experts and the jury. We were given 5 minutes to present. After the presentation, the ultimate winner of the overall competition was announced. We would like to  Congratulate the winner, 'Any Time Toilet' on their well-deserved success.

Despite the fact that we didn’t win the overall event, we are immensely pleased to have presented about blockchain in front of the honorary PM. Having been chosen as the category winner endorses that the government is willing to support and embrace the new technology for change. This was a huge win for blockchain. We're incredibly thankful to everyone who has supported us throughout our SUTC journey.

More photos of the event.