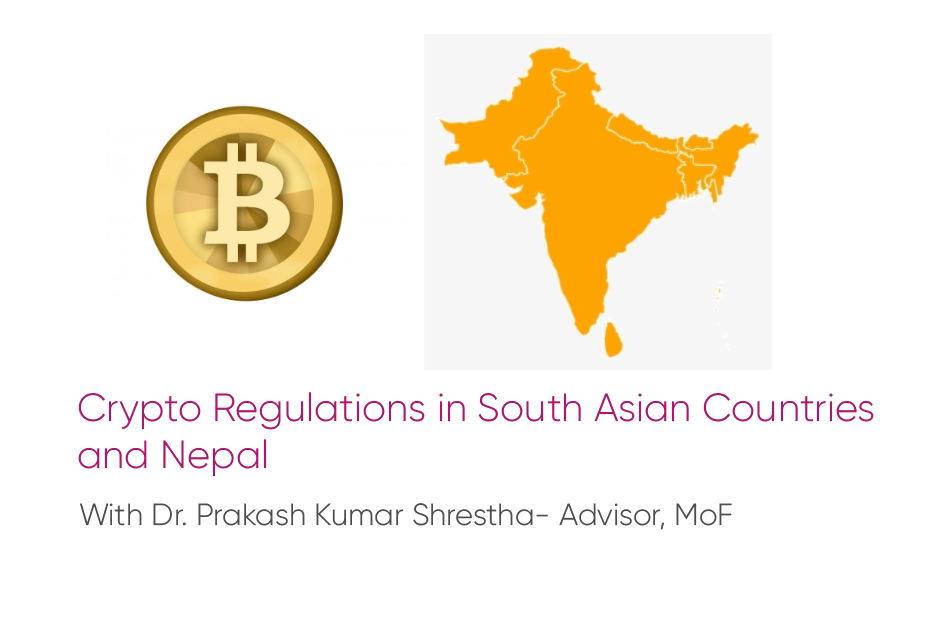 On March 10, 2021, eSatya hosted its 18th meetup on the topic “Crypto Regulations in Nepal”. With two dignified personas as the speakers for the meetup, the session was moderated by Mr.Santosh Shrestha, CEO of Rumsan Group of Companies.

Through this blog, I present you the summary of the session in 3 parts. This blog will cover up the following issues discussed in the meetup:

According to CoinLore, there are more than 5000 different cryptocurrencies in circulation. Cryptocurrency is decentralized digital money, based on blockchain technology. It is a medium of exchange that is digital and there is no central authority that manages and maintains the value. Since it is secured by cryptography it is nearly impossible to counterfeit or double-spend the money. Alongside the other advantages of cryptocurrencies are that it is a secure electronic payment system where the parallel record is maintained reducing the transaction cost.

As of now, many South Asian countries including Nepal have banned the use of cryptocurrencies.

In 2018, the Reserve Bank of India (RBI)  prohibited banks from processing transactions relating to cryptocurrency. But in the year 2020, the Supreme Court of India lifted the ban imposed earlier. However, the adoption and use of cryptocurrencies is still a dream in India as their government does not consider cryptocurrencies as legal tender in coins. Hence, the Government of India has listed a bill in the parliament seeking to ban all private cryptocurrencies in India while also laying the groundwork for an official digital currency.

In China, Bitcoin isn’t recognized as legal tender. Therefore all financial institutions and financial processes aren’t allowed to deal with it.

The Bangladesh Bank considers Bitcoin and other cryptocurrencies illegal under the Foreign Exchange Regulations Act,1947 and the Money Laundering Prevention Act, 2012.

Cryptocurrencies including bitcoin are not officially regulated in Pakistan. However, it is not illegal or banned. As of 16th January 2021, the State Bank of Pakistan did not authorize individuals or organizations to carry out the sale, purchase, exchange, and investment of virtual currencies, coins, and tokens.

The Central Bank of Sri Lanka, CBSL has not given the license of authorization to any entity company to operate schemes involving virtual currencies, including cryptocurrencies, and has not authorized any Initial Coin Offerings (ICOs).

Mr. Prakash Kumar Shrestha seems to align with the following reasons to answer why Bitcoin is illegal in many countries.

However, Mr. Shrestha shed a ray of light on few reasons why bitcoin is illegal in Nepal and reasons that would drive the possibility of Bitcoin or other cryptocurrencies legality in Nepal.

The first reason is that it would bring a threat to national sovereignty as unlike the traditional currency system that is unique to each country, the currencies not only have monetary implications but also relate to sovereignty, identity and seigniorage. There is a threat to sovereignty and possible risks of money laundering and illegal tax evasion.  Secondly, there is an issue of General Acceptability without sovereignty. With the prevalence of more than 5000 different types of cryptocurrencies, how will people trust the use of one? Thirdly, we lack the knowledge and infrastructure that is required for the regulation of cryptocurrencies. Depending on our level of development, level of digital and financial literacy, level of digital infrastructure, there is a big question mark on our ability to regulate cryptocurrencies.

The first and the foremost reason is the ability of bitcoin and other cryptocurrencies to solve the current problems such as political instability, poverty, unemployment, lack of industrialization.

However, Mr. Shrestha mentions that there is a huge scope of research that we can carry out to know the need for regulation of bitcoin and other cryptocurrencies. He urges to carry out the research that would focus on analyzing the adequate knowledge and infrastructures needed, and the need to explore the use of cryptocurrencies in relation to the country’s demography, literacy rate, and economic status. He encourages discussions about the cost over benefit analysis with the financial experts, technology experts, and policymakers that would help us get a better insight on the use of cryptocurrencies and the benefits Nepal can yield out of it.

Mr. Shrestha however made it clear that the government of Nepal has considered the use of bitcoin and cryptocurrencies illegal in Nepal and not the use of “Blockchain technology”. In Nepal, eSatya, a Rumsan company is a pioneer company that specializes in the development, consulting, and awareness about blockchain technology. eSatya provides training and awareness by conducting regular meet-ups, national events, and workshops to increase the level of expertise and adoption of blockchain in Nepal. eSatya also provides enterprise-level workshops and strategy assessments as well as proof of concepts and pilot studies to industries and organization sectors. Importantly, eSatya designs and develops blockchain products and enterprise-level solutions. They have a diverse product portfolio.