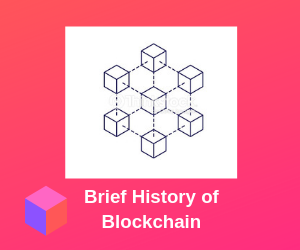 The history of blockchain doesn't go back very far. But it does go back to the early 1990s when a pair of physicists, Stuart Haber and W Scott Stornetta, were trying to solve a big problem, how to keep the past secure, and keep digital information safe and resistant to tampering?

In 1991, they published the first paper to outline the use of a chain of cryptographically secured blocks to preserve the integrity of past information and protect it. They had no idea at the time that ideas presented could be used to be formed new currencies or build the ecosystems that we see flourishing today. In 1993, in response to the proliferation of spam and other network abuses, the concept of proof-of-work was established, that sought to provide countermeasures to those.

It wasn't until 2008 that what we know today as blockchain was established, when the world was introduced to an individual or perhaps a group named Satoshi Nakamoto, the shadowy central figure in the story of Bitcoin.

It was in 2008 that Nakamoto released a seminal whitepaper that ushered in the age of blockchain. The paper was called Bitcoin: A Peer-to-Peer Electronic Cash System. This is the paper that technically defined central aspects of the most commonly known blockchain of today, Bitcoin. This knowledge is so common that some people think Bitcoin is the blockchain, and that the terms are interchangeable. They aren't. 2014, enter Ethereum. Ethereum's key innovation is that it is much more than just a currency or a record of transactions. It's specification can actually run computation. Called the Ethereum Virtual Machine, or the world computer, the EVM allows for what are called smart contracts, or programs that can be deployed onto the blockchain, letting developers create decentralized applications that are housed, distributed on the chain itself.

By 2015, Bitcoin had started to get serious attention. And by 2016, blockchain really hit a stride in the financial industry. In 2017, the Harvard Business Review suggested blockchain as a foundational technology. Today, there is a robust and fast-growing ecosystem surrounding blockchain, and the momentum is only growing towards a decentralized future.

This article is based on Blockchain: Foundation and Use Cases by ConsenSys Academy