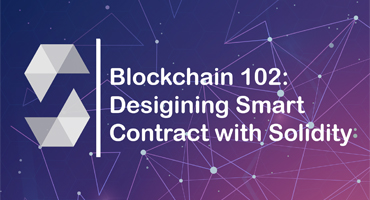 On 18th May, 2019 eSatya successfully conducted their first technical session for Rumsan Tech “Designing Smart Contract with Solidity”. The workshop which ran for around 4 hours featured  Bibek Koirala and Manjik Shrestha, both of whom have impressive backgrounds in the field of blockchain.

This course was targeted for developers and programmers (students and young professionals) who are enthusiastic about blockchain technology and DApps. It was an intermediate level workshop and all the participants  were required to have knowledge of at least one modern, high-level programming language and a basic blockchain knowledge.

Among the instructors, Bibek is a blockchain developer at eSatya. He has two years of experience in designing DApps, smart contracts and Blockchain based solutions. He kicked off  the session by explaining what blockchain is, along with its elements- hash function, distributed vs. decentralized system, P2P network, block, consensus algorithm. He demonstrated all these with the aid of a program for better understanding. Additionally, public and permissioned ledgers were brought into light.

Next up, Manjik, who is a blockchain developer and enthusiast at eSatya, took the floor . He has experience in designing DApps, smart contracts and Blockchain based solutions. He spoke about the basics of ethereum and EVM, and introduced smart contract. He guided on getting started with Solidity through remix IDE and basic syntax. All the participants designed their own a smart contract and developed a voting system and eventually they were put together after merging with UI.

The session was designed in such a way that it would  help you design, and code a smart contract. Smart contracts allow users to implement conditions, rules and policies in their domain applications, when properly leveraged can help create autonomous, efficient and transparent systems. Developers can leverage the blockchain in their applications using Solidity, a programming language for the Ethereum platform.

This workshop taught the tech-enthusiasts how to build a simple contract-based application with Solidity ecosystem and Remix IDE, including syntax. If you are interested in being a part of such sessions in the future, stay in touch with us via our website or Facebook.